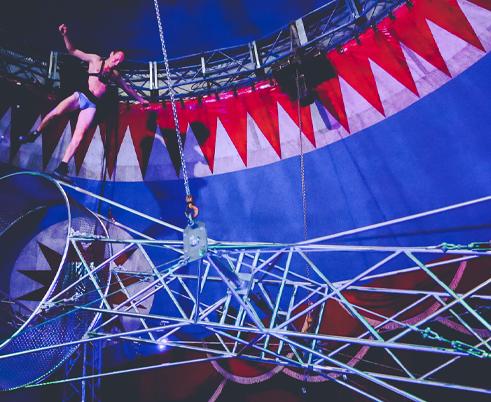 EASTER just got that bit more interesting as the circus is back in town.

Circus Funtasia will be gracing Orford Park with its amazing talent and dark humour between Thursday, April 14, and Sunday, April 24.

The 90-minute action-packed show will feature fire-eaters, acrobats and insane motorcycle stunts on the ‘wheel of death’.

If the live stunts are not enough, the show is tied together with the hilarious return act of the Geek – delivered by comedian Emilion Delbosq, who has his own set of stunts during his sketches between performances.

An event for the whole family, one reviewer described it as ‘the best circus ever seen’ with another summing it up as ‘a night filled with wonder and excitement’.

There is now even the option of ringside seats if you want to experience the action up close and feel the heat of the fire breather.

The show starts at 8.30pm and tickets are now on sale at a first come first serve basis, with VIP seating £30 per head or tiered seating tickets for £20 per head.

Children aged under two are able to attend free of charge.

For more information or to book tickets, go to website circusfuntasia.co.uk.