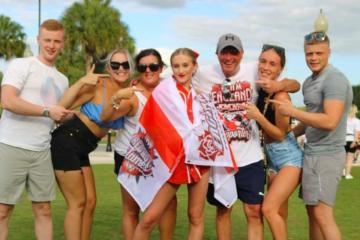 A TEENAGER from Culcheth has been selected to co-captain the Team England cheer squad to compete in the USA later this year.

Mia Hancox, who is a student at Priestley College, will be heading to Orlando in April to compete in the ICU World Championships.

The 16-year-old, formerly a pupil at Culcheth High School, has been chosen to lead the Team England senior cheer squad in the competition in spring, alongside her dance partner Georgie Sears.

Mia will co-captain the Team England squad when they head to the USA in April (Image: Gill Hancox)

Mia’s mum, Gill, said: “Her dad and I could not be any prouder! Last year, we flew out to Orlando with both of her big brothers and their girlfriends in tow, and there wasn’t a dry eye in the house.

“To see your child compete at an international level is the best feeling in the world.”

The Priestley College student has taken part in cheer competitions for eight years, with Mia being part of the Salford-based squad Red Hot Flames for the past five years.

“The athletes on Team England form a strong bond even though they come from teams all over the country, and only come together once a month to train for the World Championships.”

One misconception that people have about this form of cheerleading, Mia’s family says, is that it all looks like cheerleading at sports games – even Mia’s parents held this belief until they saw the level at which Mia competes.

Gill added: “I was blown away when she started. It’s not what you see at rugby matches, it’s a mix of dance, gymnastics, stunts and technical ability.”

However, cheer squads such as Mia’s are entirely self-funded, meaning that individuals must find a way to raise the money to get to the host country before they can even think about competing.

According to Mia’s parents, each athlete must find around £4,000 in order to get to the World Championships.

Sponsorship for athletes can lead to social media promotion and even a spot on the squad’s training kits.

Mia Hancox will co-captain the Team England senior cheer squad at the ICU World Championships in April, in Orlando, Florida.