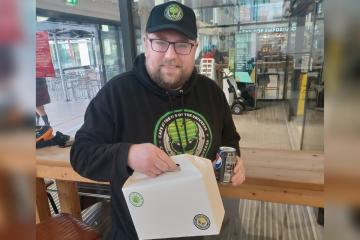 A BELOVED eatery in Warrington Market has launched what it describes as ‘a happy meal for adults.’

Taking inspiration from a limited edition promotion that was run by McDonald’s in the USA, Cafe at the End of the Universe has launched its latest menu item – the Zappy Meal.

Among the market eatery’s menu choices are sci-fi-themed dishes such as the Ham Solo beefburger, the K9 hotdog, Admiral Ackbarbecue wings, and Guardians of the Garlic Sea wings, too.

Now, the popular eatery has launched its Zappy Meal, which is tailored to adults, and is priced at £10.

For that, you are given the choice of either a double cheeseburger, buttermilk chicken burger with cheese, or chicken nuggets, a generous portion of seasoned fries, a drink, and a toy.

Being given the chance to try the Zappy Meal, I can wholeheartedly say it is well worth the money, and – if anything – is a steal.

To be able to get a top-quality burger, fries, and a drink for a tenner is something of a rarity outside of well-known fast food chains.

The eatery is inside Warrington Market (Image: Cafe at the End of the Universe)

I haven’t frequented Cafe at the End of the Universe since my ill-fated venture into the world of ‘food challenges’ in December, but trying the Zappy Meal was a welcome return to one of Warrington Market’s most popular sites.

The burger was packed full of ingredients, and when I picked it up out of the box I could only describe it in one word: dense.

In terms of portion size, I would challenge you to find better value for money anywhere else in the market, or on the high street.

Admittedly, the toy included in the box is more of a gimmick than anything else (I was the lucky recipient of an alien-shaped keyring), but I can see these limited-edition box meals going down a storm.

Cafe at the End of the Universe owner, Andy Kinsella, told me: “We’ve probably got around 200 of the limited edition boxes ready to go.

“We’re really proud that all of our food’s packaging is recyclable, but the small toys unfortunately aren’t.”

The portion size is rather generous (disclaimer: a lot of fries were underneath the burger) (Image: Newsquest)

Andy added: “We just decided to introduce them as McDonald’s did them briefly in the US last year and it seemed a bit of fun.

“I know there are plenty of adults that love a happy meal so we just decided to bulk it up a bit and make it a decent meal!

“We’ll see how it goes then decide whether it’s something we’ll bring back.”

Cafe at the End of the Universe can be found at Warrington Market on Time Square.