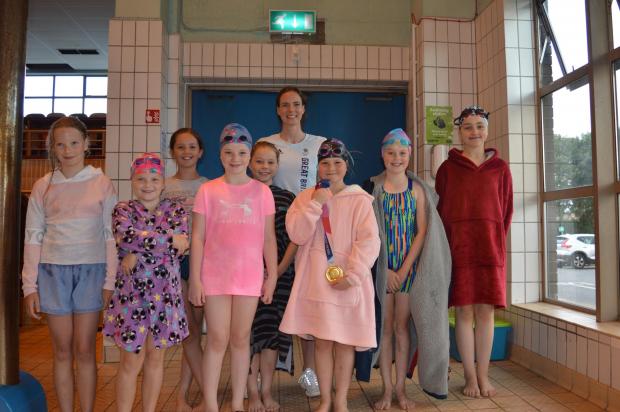 CHILDREN at Warriors of Warrington Swimming Club have enjoyed the awe-inspiring thrill of wearing Kathleen Dawson’s Tokyo Olympics medal around their neck.

The 23-year-old returned to the family home in Great Sankey this week after marking her debut Olympics with a stunning gold-medal success alongside Great Britain teammates in the mixed 4x100m medley relay on Saturday morning.

And one of the former Great Sankey High School student’s first missions upon returning home was to visit coach Darren Ashley, volunteers, friends and young swimmers of her former club during a training session at Woolston Community Hub.

One club official said: “The kids were in awe.”

The circumstances are fairly unprecedented, with the coronavirus pandemic protocols around the global event meaning competitors are returning home from Japan as soon as their events are finished rather than staying in the Olympics village for the entirety.

So with the Olympics still in full swing and dominating the media, for the youngsters to get a close-up look and feel of Kathleen’s hard-earned and ultimate glittering prize at this time it has been a thrilling experience for them.

“The fact she came along to personally see Darren and the upcoming swimmers shows how much she thinks of Warriors from where it all started,” said the club spokesman.

“She has kindly donated one of her Olympic swim caps for us to auction to raise funds for our swim training camp in Cyprus too.”

Warriors of Warrington are hoping the town’s youngsters feel inspired into joining the club after Team GB’s greatest ever performance in an Olympics pool.