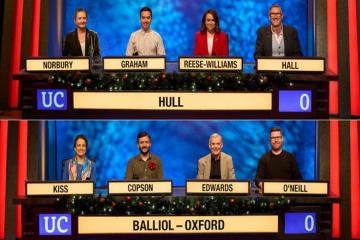 A LYMM crime writer has captained his team into the final of the celebrity edition of University Challenge.

Martin Edwards is the captain of the Balliol College, Oxford, team in this year’s winter University Challenge.

He lives in Lymm, and is one of the most prolific crime writers of our time, currently holding the title of President of the Detection Club – a role previously held by the queen of crime, Agatha Christie.

Martin trained as a solicitor before becoming a successful crime writer (Image: Newsquest)

Each year, the elite quiz show puts on a series of Christmas special episodes with well-known alumni from each university – this year’s featuring the likes of Reeta Chakrabati, Paul Gambaccini, Owen Jones, and Lymm’s Martin Edwards.

Martin was born in Knutsford, but now lives in Lymm, and has written almost 50 short stories, edited more than 20 anthologies and has reviewed crime fiction since 1987.

He was schooled at Sir John Deane’s College, before heading to Oxford University – he then became a solicitor, before turning his hand to writing crime fiction.

Speaking to the Warrington Guardian in 2014, Martin said: “I think the thing about crime writers is that they tend to be a fairly peaceful bunch of people.

“I’ve often said if I have a bad day in the office I can go home and murder somebody in fiction so it gets it out of your system which is quite a good thing.”

One of Martin’s books says the only folks who think about killing people are psychopaths and crime writers (Image: Newsquest)

Martin, who has two children, said he has loved crime stories since he was a boy, adding: “The mystery, the clues, the surprise solution, trying to guess it – that appealed to me enormously when I was young and still does.”

He is the captain of his team in the 2022 festive special series of University Challenge, having beaten teams from universities like SOAS University of London, and BBC News presenter Reeta Chakrabati’s Exeter College, Oxford.

Martin’s team, Balliol College, returns to BBC Two tonight, Friday, at 8.30pm, in the final of the Christmas run of University Challenge 2022, as they take on the University of Hull.