A brief history of Warrington 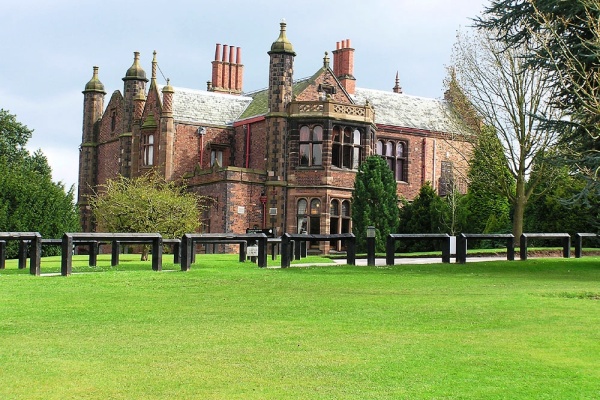 WARRINGTON IN THE MIDDLE AGES
At the time of the Domesday Book in 1086 Warrington was only a small village but in time it grew larger and more important. St Elphin's Church existed by 1086 and probably much earlier. Furthermore the Normans built a wooden castle at Warrington around 1070 AD.

By the beginning of the 12th century Warrington had grown into a small market town. In 1255 Warrington was granted the right to hold a fair. In the Middle Ages fairs were like markets but they were held only once a year and they attracted buyers and sellers from a wide area. From 1277 Warrington had 2 fairs.

Then in the late 13th century Augustinian friars came to Warrington. Friars were like monks but instead of withdrawing from the world they went out to preach.

In 1495, at the very end of the Middle Ages, a stone bridge was built over the Mersey.

WARRINGTON 1500-1800
In 1526 a wealthy man named Sir Thomas Boteler left money in his will to found a grammar school in Warrington. In 1539 Henry VIII closed the friary.

During the 16th century and the 17th century Warrington grew larger and more important. This was despite outbreaks of plague in 1613 and 1647. There was also a famine in Northwest England in 1623-1624, which led to many deaths. However Warrington recovered from each disaster and continued to grow.

By the time of the civil war in 1642 Warrington was still a small town with a population of around 2,000, but it was strategically important because of its bridge. In 1642 Royalists seized Warrington but the parliamentarians laid siege in 1643. In May 1643 they captured Warrington and they held it for the rest of the war.

Georgian Warrington was famous for its sailcloth. In the 1770s a writer said that Warrington supplied 'nearly one half of the Navy of Great Britain'. He also said that making pins was an important industry in Warrington. So was making 'locks, hinges, cast iron and other branches of hardware'. The writer said that near the town there was: 'A very large works for the refining of copper'. He said the glass industry and sugar refineries 'employ many hands'.

Bank Hall was built in 1750. It later became the Town Hall. The first newspaper in Warrington was printed in 1756.

In the 19th century there were a number of improvements to Warrington. In 1813 an Act of Parliament formed a body of men called Police Commissioners. They had powers to pave, clean and light the streets of Warrington. At first oil lamps lighted the streets but in 1821 gaslight was introduced to Warrington. The Commissioners also organised refuse disposal and from 1828 they provided a fire brigade. The first police force in Warrington was formed in 1838.

However like all early 19th century towns Warrington was overcrowded and unsanitary. In 1832 there was a cholera epidemic that killed 169 people.

However life in Victorian Warrington gradually improved. In 1846 a company was formed to supply Warrington with piped water supply. In the 1860s and 1870s sewers were dug.

In 1847 Warrington was made a borough and gained a mayor and corporation. Meanwhile in 1810 a dispensary was opened where the poor could obtain free medicines. Warrington infirmary opened in 1877.

The linen industry continued. Some cotton was woven in the town though it never developed into a cotton town like those further north. There was also a large soap making industry in Warrington. From the end of the 19th century gas cookers were made in Warrington.

WARRINGTON IN THE 20th CENTURY
In the 20th century Warrington, like other towns, underwent 'de-industrialization'. Old manufacturing industries declined. However service industries such as retail, education and local government grew rapidly.

The first electricity was generated in Warrington in 1900. Between 1902 and 1935 electric trams ran in the streets of Warrington. The first buses ran in 1913 and between 1931 and 1935 they replace the trams.

In 1917 Orford Park (originally the grounds of a hall) opened. The first council houses in Warrington were built in the 1920s and 1930s. Many more were built after 1945, many of them to replace demolished slums.

Then in 1968 it was decided to make Warrington a new town. People from Greater Manchester were moved to the town. As a result Warrington grew rapidly and new suburbs and industrial estates were built.

In 1974 the boundaries of Warrington were enlarged and in 1998 Warrington became a unitary authority.

WARRINGTON IN THE 21st CENTURY

In the 21st century Warrington is still a thriving town. The Pyramid Arts Centre opened in 2002. Today the population of Warrington is 202,000.

~Things To See and Do in Warrington~