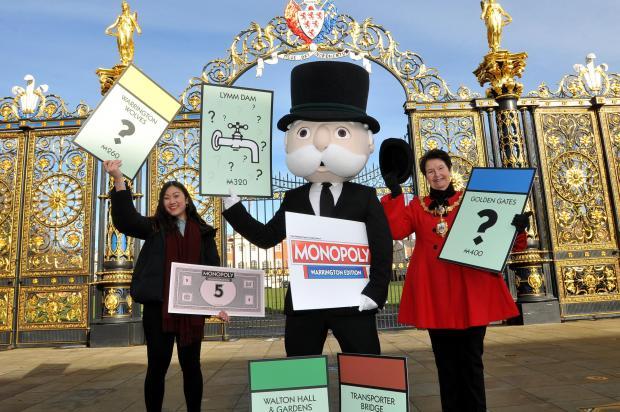 YOU could be in with the chance of being a VIP for the Day on the MONOPOLY: Warrington Edition launch day.

A VIP experience is being offered to one lucky person in the town.

They will be the guest star at the official launch of the special edition on Tuesday, October 25.

The winner will get to be a VIP alongside the game brand’s icon, ‘Mr Monopoly’ and the Mayor of Warrington, at the launch event, as well as receive the very first board to roll off the presses.

To enter, the game’s bosses want to know in the form of a verse, poem, ditty or the like, ‘why you love Warrington’.

Any written entry should have a maximum of 25 words.

“The most inventive and creative entry will win,” says Jennifer Lau, from the game’s makers, Winning Moves UK.

“We are totally open-minded as to the form the entries should take, be they visual or in video form, or in whatever other creative form you can think of.”

The Mayor of Warrington, Cllr Jean Flaherty, said: “This is really exciting for the people of Warrington and it’s fantastic to know that we’ll be able to buy the Warrington edition of MONOPOLY from October.

“I can’t wait to see which landmarks and locations are featured on the board as part of this iconic game.

“Residents now have the chance to be a VIP for the day and to take part in the launch event.

“I look forward to hearing why people love Warrington and all about their special memories and favourite places across our town, and to meet the lucky winner on the day.”

To enter, you can email VIP@6StarPR.co.uk.

At the time of the announcement – in March 2022 – that Warrington is to ‘Pass GO’ in time for this Christmas, the public were invited to send in suggestions for squares to fill the board and ideas for customised Chance and Community Chest cards.

Ms Lau, Custom Games Executive at Winning Moves UK – who is producing the board under official license from the MONOPOLY brand, owned by Hasbro – added: “A huge thank you to everyone who sent in suggestions.

“The response exceeded all our expectations.

“The most inventive and creative entry will win.

“We are totally open-minded as to the form the entries should take, be they visual or in video form or in whatever the creative form.

“As the launch of the game is during the October half-term holidays then we also invite teachers to consider setting artistic projects. Any such entries would be great. Anyone can be a VIP from 5 to 105 and beyond!”

In all 30+ Warrington landmarks and favourites are being showcased in the game. Over the last 25 years, Winning Moves UK has produced official versions of MONOPOLY… from Dubai to Dublin and Sydney to San Antonio. Now the dice are rolling upon Warrington.