A HALLOWE’EN loving family have transformed their home into a Stranger Things themed masterpiece, and they are already getting a lot of attention.

To say spooky fan Louise Edelstein from Crow Lane West in Newton-le-Willows loves Hallowe’en would be an understatement.

The 32-year-old, who says she was ‘obsessed’ with Stranger Things, has transformed her front garden into Hawkins, complete with 10ft Demagorgon on the porch, a floating Vecna held up by concrete posts and missing posters as well as the iconic alphabet and lights from previous seasons and Castle Byers.

She has built this in the lounge and shed over the course of the month with her partner Vincent Towler, who hasn’t yet seen the series.

Louise, who owns V&L Kitchen Wraps, said: “I just love Hallowe’en, I always have and I think it’s so much fun.

“In past years we’ve had the house look like Jeepers Creepers and a monster house but after watching Stranger Things I just became obsessed and wanted to create a scene from that.

“Our family thinks we are mad, but I just love it and my partner loves a project so even though he hasn’t seen the series he was happy helping me put it all together.

“Our eldest has said she’s not coming home through the front door until it’s gone, but the other neighbours and kids love it.

“Kids are already coming into the garden to take pictures with the display. It’s just so much fun and I love seeing them love it so much.

“We just built it slowly and even got the grandfather clock for free from someone on eBay. We just love doing it each year.

“People have travelled across the North West to see our displays in the past, so I hope this one will draw people in too.” 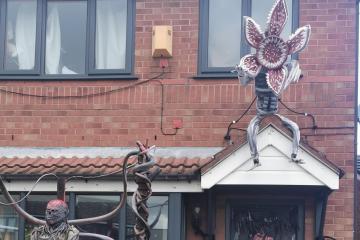