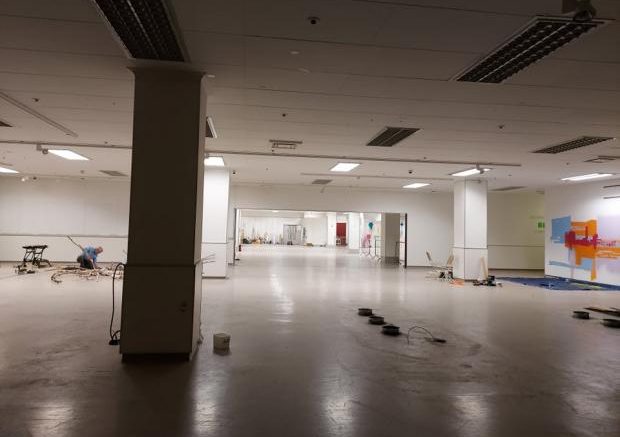 IT has been four years since Marks and Spencer shut in the town centre and a lot of us are still missing Percy Pig sweets and Colin the Caterpillar cakes.

But the Sankey Street unit, part of Golden Square, has a new lease of life as a temporary gallery, workshop and studio space on both floors of the former store.

It is all part of a project by Manchester’s Castlefield Gallery to breathe new life into commercial properties that are hard-to-let and have been vacant for a long time.

The space has been used by artists since late last year and it is supported by Culture Warrington where a number of projects are in development.

These behind the scenes shots of the site and work in progress show the former M&S looks very different when stripped back to a bare unit.

Projects will continue for the short to medium term as Warrington Borough Council has an agreement in place with Castlefield Gallery to make use of the space while it is not being used for retail purposes.

If a new commercial tenant strikes a deal, the groups using the site are given 30 days to vacate and return the property in the same condition it was took on.

“As a small charity, Castlefield Gallery works with landlords to take on long-term vacant or hard-to-let properties in order to provide work and exhibition space for artists to develop and test out new artwork.”

M&S shut on July 29, 2017, when its 95 employees were offered jobs at Stockton Heath and Gemini Retail Park branches.

The store had been open since the 1930s.

THE owner of a retail park in Warrington has issued a statement over recent criminal incidents which have taken place. Warrington Guardian | What’s On …

A LYMM barber has set up a music event in the village to give bands a platform to play their music. Warrington Guardian | What’s On …

Dominic Lisle, who has been sober for 17 years, has won a ‘Hero Award’ from Macclesfield Town Council Cheshire Live – Home…