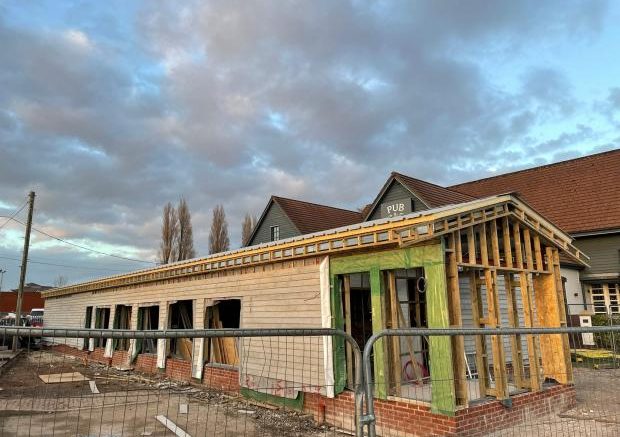 A CENTRE park pub is undergoing £500k worth of work for a new function suite.

The Waterside, based in Centre Park Square, is set to have the work finished for mid-April ahead of a first function in late April.

Amanda Crilley and Daniel Crilley, who run the Greene King pub, wanted to upgrade the marquee space and they are ‘elated’ that it has all fallen into place.

“Meetings and events are massive for us at The Waterside and the marquee itself started to look not as special as how it’s always looked in the past,” said Amanda.

“The company said they will do the first-ever brand new build function suite in its history.

“We are elated because it’s all brand new. We’re made up.”

The room can cater for one or two events

The space comprises one large wedding suite which has a folding door in the middle so it can be split into two separate suites.

The 34-year-old continued: “We were a massive part of the planning and the design work too so we are really excited that we have got the large investment and that we have something more permanent.

“I think Warrington has a very limited number of separate suites for weddings and conferences.

“It’s not like a marquee which only has a couple of years’ worth of life.

“It can do both large scale conferences and when it gets split into two, we can host two meetings.”